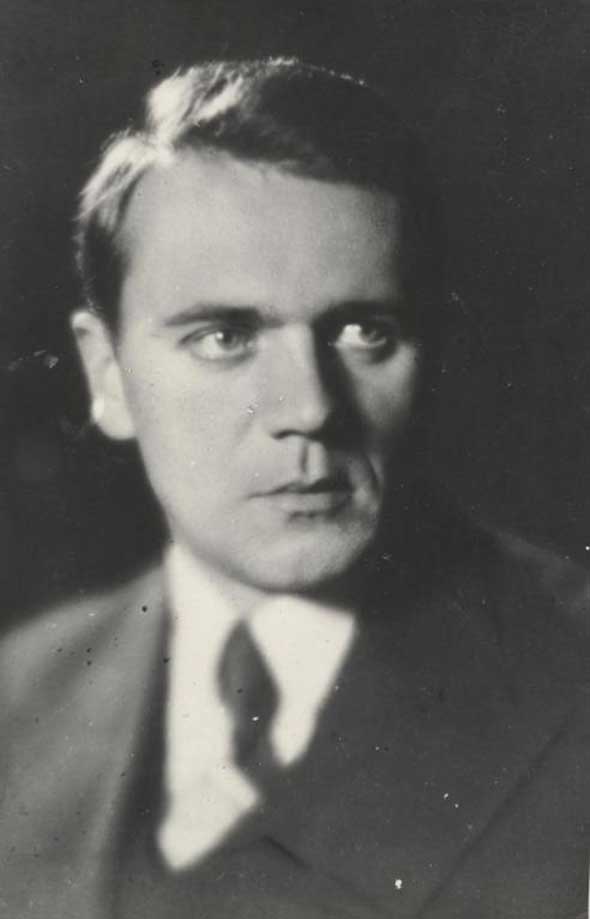 Evgeny Golubev was a Moscow-born Russian composer and composition teacher at the Moscow Conservatory. I am doing lots of research on him, and I will post my findings here as I am able. It may take a few years, but I am planning a series of recordings as well.

He was a fine composer with a conservative, tonal style; he didn't have the greatest gift for memorable melodies and themes, but he was an expert at creating a mood and holding the listener's interest. He steered clear of Shostakovich's angst and emotional depths, but many pieces are suffused with a sweet loneliness. His music often possesses a delicacy and a French influence that I've heard in little other Soviet music. 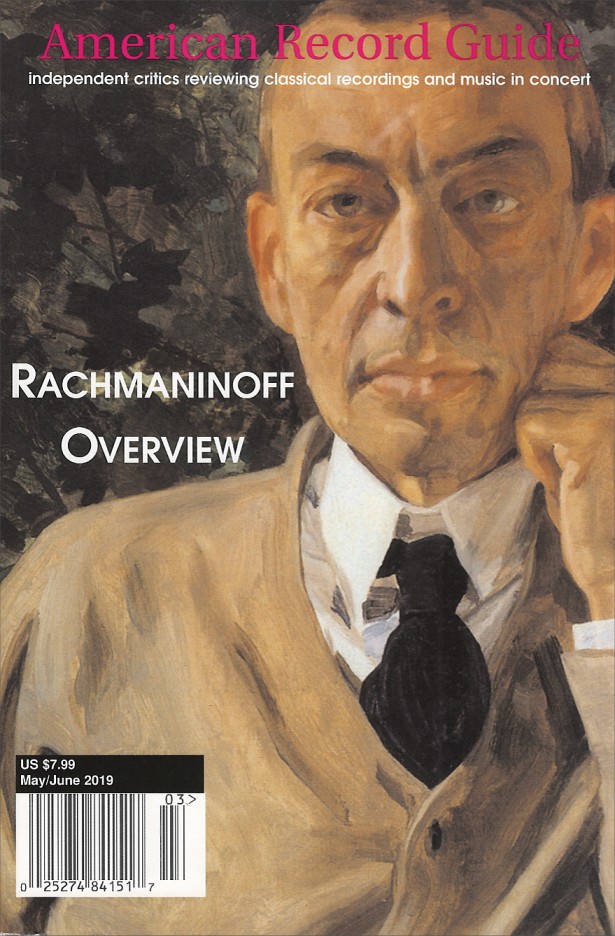 I wrote a 3-page introductory article about Golubev's music and recordings for the May/June 2019 issue of American Record Guide, available for order here in print or PDF format. You'll also get an overview of Rachmaninoff recordings, concert reviews, and coverage of a few hundred new CDs written by independent critics. The article includes a brief sketch of Golubev's life (brief, because there's not much about him in English), notes on his musical style, and examinations of his Symphony No 7, Piano Concerto No 1, Piano Sonatas 4 and 7, Harp Quintet, String Quartets 10 and 11, Piano Quintet, Six Sacred Choruses, and other pieces.

At the age of 9, Golubev began attending the Gnesin Academy of Music in Moscow, and he studied composition with Miaskovsky at the Moscow Conservatory and with Prokofieff and Nikolai Zhilyayev. He joined the Conservatory’s faculty in 1937, teaching polyphony; he became professor of composition in 1948 and was head of the composition department from 1956 to 1959. Khachaturian, Boris Tchaikovsky, and Rodion Shchedrin took his classes in polyphony; Andrei Eshpai, Tatiana Nikolayeva, and Schnittke were among his composition students. Golubev was a conservative composer, but by all accounts he encouraged his students to absorb the newest music. His 90-odd opus numbers include 7 symphonies, 10 piano sonatas and 3 piano concertos, concertos for violin and cello, 2 oratorios, the first Russian piano quintet of the Soviet era, a harp quintet, 24 string quartets, songs and choral works, and other pieces.

9-Jan-2021 -- The coronavirus hasn't gotten me yet! I've been busy buying a bookstore's inventory to sell online, trying to make up for lost performing work. The last several months have been a scramble. I discovered today that other people's YouTube videos of Golubev, including the Tenth and Eleventh String Quartets, have vanished. I'll try to upload them soon on my own channel. Pianist Phillip Sear recorded Golubev's "Dream Waltz" back in November.

14-Aug-20 -- Scores for the Harp Quintet, Op 39, and the Concerto Aria, Op 46 No 4, have been uploaded; links are once again on the List of Compositions page. Special thanks for a Facebook follower for sending me the Concerto Aria score.

12-Dec-19 -- About 20 scores have been uploaded in PDF format. Click on the link in the appropriate column on the List of Compositions page. I got the score and parts for the Harp Quintet from the library, and I will have that scanned and added soon. I also uploaded the "program" notes from the score to the Piano Quintet (1938); click on the name of the piece on the List of Compositions page.

29-Nov-19 -- The internet comes through again! Today's find is the 1961 performance of the Concerto Aria, Op 46 No 4, with Vera Dulova leading the 14 harps and Mstislav Rostropovich leading about 40 cellists. The video comes from a concert for delegates of the XXII Congress of the CPSU, October 1961, Kremlin Palace of Congresses. From the concert poster: "Ensemble of cellos and harps performs; the leaders are M. Rostropovich, G. Kozolupova, S. Aslamazyan, and V. Dulova."

22-Nov-19 -- A few items this time:
First and foremost, I discovered another recording of the Cello Concerto! I knew archive.org made backup "copies" of many websites to preserve them in case the original site shut down, but I did not know that they also had an archive of music (and audio books, etc.). There was a Hungarian-American named Miklos Pogonyi who taped thousands of hours of broadcasts and rare LPs, and people have been digitizing and uploading his collection. There is a 1958 broadcast of the Cello Concerto with Jörg Metzger as the soloist and the Nuremberg Symphony conducted by Günther Neidlinger. Movements II and III sound lethargic compared to Rostropovich's performance, and the sound quality is not great (an understatement), but I am thrilled that someone preserved it. The only other Golubev piece is the Fourth String Quartet with the Komitas Quartet, which was already available elsewhere. The collection is well worth checking out, though -- I found many recordings of Paul Creston pieces that I've never seen anywhere else. There's even Gunther Schuller's gawdawful Saxophone Sonata with modem noises intruding. Couldn't have happened to a nicer piece. At any rate, I took the liberty of uploading the Cello Concerto to YouTube, and the link is on the List of Works & Audio page (see above).

Second, I got a mono needle for my turntable, and I'm in the process of making hi-res transfers of some of my LPs that aren't readily available on CD. Golubev's Second Piano Concerto was first issued probably in the 1950s with Vladimir Vlasov's symphonic piece The Bard Sings of Lenin (Акын Поет О Ленине), Romanian Rhapsody, and Festive Overture on Melodiya 016323—16324(а) with a yellow and gray cover. Melodiya reissued the album in honor of the 100th anniversary of the birth of Lenin in 1970, with red flags and a hammer and sickle on the cover (Melodiya 33D 016323--24). I got this tidbit of information about the reissue from a Russian circus website, of all places. Sometime after that--if my educated guess is correct--Melodiya again reissued the Second Piano Concerto paired with Golubev's Harp Quintet, which had originally come out on a pre-Melodiya "Torch" label LP with a Haydn string quartet. All that to say this: on the LP with the Vlasov, Golubev's concerto has a lot of background hiss; Vlasov's music doesn't have that. On the LP with the Harp Quintet, the sound on the concerto is much better. So, if you are intent on purchasing it, I'd put my money on a copy with the Harp Quintet.

Thirdly, I am "trading" a performance of Brahms's Horn Trio with two students at Cedarville University, and if everything works out, they'll be recording Golubev's Poeme for violin and piano and Arioso for horn and piano in return. I am by no means a virtuoso pianist, but a lot of Golubev's piano and chamber music is within my abilities. My plan over the next decade or so is to record as much of it as I can. I'm also looking at the First Piano Sonata and the set of character pieces In Old Ruze. I'll likely do a solo recital at Cedarville next year, maybe all Golubev, maybe not. I've wanted to play Paul Ben-Haim's Sonatina for a long time, and I'm also looking at the 11 Variations on a Theme of Glinka, to which Shostakovich, Eshpai, Kabalevsky, and others contributed. Shostakovich's three variations have been recorded, but I don't believe the whole piece has. Anyhow, I'll certainly post about the recital here and on the Facebook page.

21-Jul-19 -- My apologies for the lack of updates. At the end of May I started translating Sanko's dissertation on Golubev in Google translate and then editing it so it's idiomatic in English. I have 41 pages finished, which is about a third of the dissertation's actual text. This stalled out in June as my wife and I are in the process of buying a house, and I'm trying to scratch enough income together to survive the summer until the school year starts up again. If you ever want to be financially comfortable, don't become an accompanist! Anyway, here's a paragraph I wrote about the Harp Quintet for an essay in American Record Guide. Enjoy this lovely piece.

22-May-19 -- Essay about the Collective Variations on Myaskovsky's 16th Symphony by Golubev, Kabalevsky, Schnittke, Shchedrin, and others

12-May-19 -- Return of the Sun oratorio audio now available

Here is a recording of his Tenth String Quartet performed by the Shostakovich Quartet (they were listed on the Melodiya LP only by their individual names):