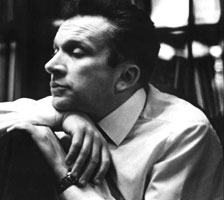 Schnittke discussed the variations in the context of his relationship with Rozhdestvensky: "It seems that the first time I saw and experienced Gennady Nikolaevich as a conductor was when he performed Andrei Volkonsky's Concerto for Orchestra (Concerto Grosso; 1953). This composition was played once, if I remember right, in the Great Hall of the Conservatory, in about 1954 or 1955. My first contact with him (Rozhdestvensky) came in the early 60s. Then, on the anniversary -- the 100th anniversary of the Moscow Conservatory -- a collective work was written by professors and teachers of the composition department. I, like many of my colleagues, participated in this. We all wrote variations on Myaskovsky's theme. The writing turned out to be extremely motley, both stylistically and technically.... I find it difficult to recall all the participants, but among them were Kabalevsky, Golubev, Chulaki, Fere, Anatoly Nikolaevich Alexandrov, and many young composers -- Sidelnikov, Pirumov [Here, Schnittke misremembered -- ed.], Nikolaev.... Of course, the first problem that any conductor would face here is whether it was possible to play it at all and how to put it all together. The problem was not the conductor's, but in its own way the composer's: to make something completely different from the material yet have it all perceived as a whole. And this did not become a problem for Gennady Nikolayevich. He "placed" the material in such a way that at some point he switched from variations written by professors to variations written by younger teachers, so that, in fact, something unique came out of the flow of disparate things. The invisible composer's task was extremely simply and convincingly executed by him. This was the first time that one of my scores, among those of others, came into his hands." (Quotation from Musical Life, 1991, No 13-14; translated by Google and edited/English-ized by me.)

Myaskovsky himself had this to say about his Symphony No 16 after its premiere: "The symphony has had a stormy success here; some naïve persons were even saying, "at last (he) had managed to write a true symphony"! It is true that the symphony sounds excellent. It is energetic, very clear and melodic, and the 3rd movement is openly emotional in a grandiose way, while the ending of the finale is extremely effective in its humble simplicity and softness. But the content, the effects, the technique, the harmony – all of this is very much second-hand! Is that what does the trick?! In any case, to me this success seems quite undeserved and for this reason it cannot please or stimulate me." (Quoted by Marina Frolova-Walker in her illuminating article, From Modernism to Socialist Realism in Four Years: Myaskovsky and Asafyev)

Myaskovsky's 16th, known in Russia as the Aviation Symphony, was written in 1936 after the crash of the airliner Maxim Gorky. It "includes a big funeral march as its slow movement, and the finale is built on Myaskovsky's own song for the Red Air Force, "The Aeroplanes are Flying". (Information from Myaskovsky's Military Wikia entry)

Believe it or not, video of the 1966 Moscow Conservatory concert exists! As you can imagine, the sound is atrocious, but here it is. Below, I have listed where each composer's variation occurs; they're guesses based on Rozhdestvensky's pauses and page turnings. (The announcer mentions each composer, and the order she gives lines up with other articles I've read.)

In the mid-2000s, the Collective Variations were resurrected and performed again along with two other collectively written variations: Ten Views of the Ten Commandments (2004) and Dedication (2006, for the 100th Anniversary of Dmitri Shostakovich's birth). Here is a brief announcement about one of the concerts, an article about the Shostakovich Dedication, and an article about the Ten Views of the Ten Commandments. I believe some of the concerts were broadcast; I'm not holding my breath, but maybe someday one of the orchestras will release a recording.